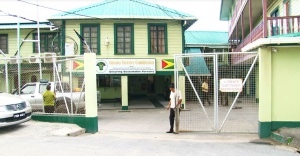 The Guyana Forestry Commission noted the publication in Kaieteur News dated 23rd January, 2019 bearing the caption ‘Hurried allocation of over one million acres of State Forest will be a national environmental disaster’.

In the article there were a number of assertions made by the author V. Li suggesting that ulterior motives for the proposed re-allocations will have a negative impact on the principles of sustainable forest management.

The Guyana Forestry Commission Act 2007 and the Forests Act 2009 have given a clear mandate to the GFC for the management and administration of State forests. The vacant areas as advertised were repossessed by the GFC in 2016 after significant transgressions of the Forest Act 2009 by the previous concession holders.

The areas as advertised will be issued in accordance with the Forest Act 2009 and as embraced in the Guyana Timber Legality Assurance System (GTLAS) which is internationally recognised as being a transparent and legitimate system of allocating state forest; by donor partners including the European Commission and the Kingdom of Norway.

The article cited the proposed re-allocations as a significant development but attempts were then made to suggest that the Commission was guided and or motivated by political considerations. The GFC unequivocally states that the timing of the advertisement has no bearing on the impending electoral process. The areas have been held in abeyance since their repossession. Their reallocation was based on submissions recommended by the GFC, which were duly studied and carefully considered by the Board of Directors of the GFC.

It should be noted that a portion of the Barama concession was allocated in 2018 under and the very process being following to re-allocate the current areas and no concerns of forests degradation or ‘environmental disasters’ were expressed by anyone. Therefore, it is ludicrous to conclude that the impending re-allocations will have any dire effect on the environment or be contrary to the principles of sustainable forests management practiced by the sector.

The writer confused the notion of forest protection with non-use and or non-issuance of forest areas. It must be remembered that Guyana has been sustainably harvesting its forests for more than a 100 years’ and yet deforestation rates remains one or if not the lowest in the world. A fact that has been confirmed by the Forests Carbon Partnership Facility (FCPF) REDD+ process and the Monitoring Reporting Verification System (MRVS) reports which have resulted in Guyana receiving approximately GY$9B in December, 2019 from the Kingdom of Norway.